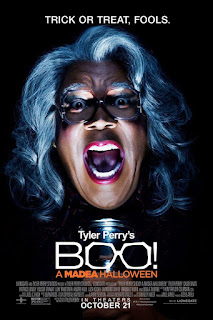 You can say this about Tyler Perry: He definitely earns his creative credits as he writes, produces, directs and stars in Boo! A Madea Halloween, now playing in theaters.

Madea (Tyler Perry) winds up in the middle of mayhem when she spends a hilarious, haunted Halloween fending off killers, paranormal poltergeists, ghosts, ghouls, and zombies while keeping a watchful eye on a group of misbehaving teens.

Tyler Perry once again plays Madea, the overly opinionated grandmotherly figure with a multicolored past (and , based on her mentions of outstanding warrants, a checkered present), who used to just appear in and out of his other comedies but has since taken center stage in his recent comedies. Perry is just hysterical when puts on the drag and plays Madea, truly showcasing his creative talents. Perry as plays Madea’s grumpy brother Joe, and though Joe doesn't appear much in the film his ramblings are still very funny.

As a comic filmmaker, Perry directs his other actors very well, including himself in his third recurring role as Brian, Joe’s tolerant straight-man son. The banter between Madea and Joe is just hysterical, especially when you add Cassi Davis and Patrice Lovely, also done up in old-age drag, perfectly echo the Madea and Joe material.


The advertising materials used for A Madea Halloween promised horror spoofery and the movie did not disappoint. Using the usual horror style establishes shots and a genuinely creepy (yet hilarious) scene with a clown costume. This movies prank-wars payoffs offer thrills and hilarity and has a lot in common with a Halloween themed episode of a sitcom. Madea still remains a fun and compelling character and this film was a perfect comedy for her.