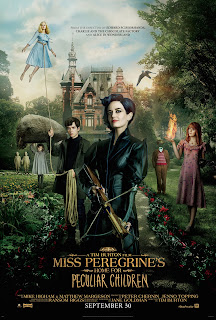 Tim Burton once again brings us a new, fascinating and original new world with his latest film Miss Peregrine’s Home For Peculiar Children, in theaters now.

When his beloved grandfather leaves Jake (Asa Butterfield) clues to a mystery that spans different worlds and times, he finds a magical place known as Miss Peregrine's School for Peculiar Children. But the mystery and danger deepen as he gets to know the residents and learns about their special powers - and their terrifying enemies. Ultimately, Jake discovers that only his own special peculiarity can save his new friends. Based on the novel "Miss Peregrine's Home For Peculiar Children," written by Ransom Riggs.

Asa Butterfield is absolutely perfect in his role and has just literally grown up in front of our eyes since starring in films like The Boy in the Striped Pajamas and Martin Scorsese's Hugo. Butterfield is such a brilliant young actor and is sure to be one of the next rising stars. Eva Green is brilliantly flawless in her role of Miss Peregrine and convincingly portrays her character exactly as she is described in the book with her ebony hair streaked with blue and swept up into a bird’s-nest ’do, Green cleverly suggests her bird-like alter ego, standing upright in her peacock-blue gown, glowering down through amplified eyeliner, and extending her long, slender fingers as if they were talons. Green certainly seems to be Burton’s new muse. Samuel L. Jackson, as the villainous Barron, gives one of his best prevailing performances in recent years.

What makes this film a perfect fit for Burton is screenwriter Jane Goldman’s continually entertaining script allowing the directors peculiar sensibility to revisit and expand patterns and themes from his previous works. Plus, it's an excuse to work with Green again since Dark Shadows and hopefully we will get to see this perfect partnership continue. Miss Peregrine’s Home For Peculiar Children is definitely a movie that I would recommend to others and hopefully we will get to explore more of this amazing world in future installments.