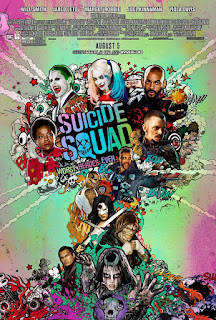 If Marvel has the best superheroes, so the prevailing geek-logic goes, then DC has the coolest villains. So it’s only sensible they’re finally placed front, center and in the firing line. Filling its entire super-team with previously unseen antagonists, “Suicide Squad”, now playing in theaters, represents a Flash-speed sprint of a catch-up for the rapidly forming DC Cinematic Universe.

Figuring they're all expendable, a U.S. intelligence officer decides to assemble a team of dangerous, incarcerated supervillains for a top-secret mission. Now armed with government weapons, Deadshot (Will Smith), Harley Quinn (Margot Robbie), Captain Boomerang, Killer Croc and other despicable inmates must learn to work together. Dubbed Task Force X, the criminals unite to battle a mysterious and powerful entity, while the diabolical Joker (Jared Leto) launches an evil agenda of his own.

Will Smith is great in his role as Deadshot, fitting in perfectly in this film, and the DC Universe, while making his character very likeable for a bad guy and looks badass doing his thing. Then there is Margot Robbie fantastically portraying Harley Quinn, the Jokerette, if you like; though “crazier than him, and more dangerous”, we’re warned. Skipping daintily about in pants hotter than hell’s sauna, isn’t quite allowed to completely steal this show — but she certainly borrows it from time to time, and repays you with enough interest to make that mooted Harley stand-alone an enticement. The rest of the cast was excellent as well.

Plus, among others, we have the stick-hurling Captain Boomerang, which finally sees Jai Courtney flexing his rough charisma on screen; and flame-molding gang-banger Diablo, the team’s unlikely conscience in the impressively intense, tat-etched form of Jay Hernandez.

Jared Leto’s incarnation of the Joker is essential to its success. Where Heath Ledger’s version was scarred, shabby and countercultural, Leto’s has a smooth, bling gangster swagger; a modern take on the way the original comic-book creation riffed on ’30s mobsters. But it’s not his swish, purring style and elegant, slo-mo cackle that really hooks you, it’s something we’ve never seen before: The Joker in love. It’s unsettling and compelling — almost enough to make you wish it were more than a subplot. And it was awesome to see Ben Affleck suit up as Batman again for some cameo work, plus it gave fans another treat in the form of Ezra Miller as The Flash in full costume. Plus, you just can't go wrong watching Viola Davis be a total badass.


But there’s more to come, surely? Judging by what Ayer’s pulled off here, you can bet there will be.