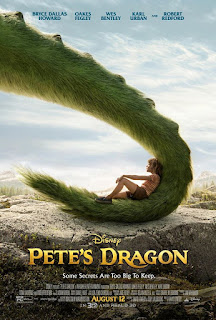 I don’t think I have ever seen a cute and cuddlier dragon roaming around a movie screen than Elliot, the gentlest green giant at the center of “Pete’s Dragon,” a remake of Disney’s 1977 classic.
Mr. Meacham (Robert Redford), a woodcarver, delights local children with stories of a mysterious dragon that lives deep in the woods of the Pacific Northwest. His daughter Grace (Bryce Dallas Howard) believes these are just tall tales, until she meets Pete (Oakes Fegley), a 10-year-old orphan who says he lives in the woods with a giant, friendly dragon. With help from a young girl named Natalie (Oona Laurence), Grace sets out to investigate if this fantastic claim can be true.
Bryce Dallas Howard is fantastic in her role, playing Grace with such heart as she begins to bond with this mysterious boy and open up her mind to believe in the impossible. And yes, this time she is not running away in high heels from a scary monster. Robert Redford, even though he doesn’t get much screen time, is great in his role and proves that even if you are a grown up, you can still believe in magic.
Now, Oakes Fegley is a true rising star and is one of the big standouts of this film as he is able to bring to life Pete’s story and really captures what it is like for a kid to grow up in the wood and who also lost both his parents. You can see that in scenes when he is remembering his parents and he just looks lost and believably sad, where some kid actors at his age aren’t as believable. The chemistry between Fegley and Howard is great as it grows throughout the film and turns into something spectacular. There relationship starts off rocky as Pete is thrown into new surrounds and is very nervous and twitch and Grace tries to help help him get used to his new surroundings. Eventually he warms up to her and her family and there bond becomes stronger, like a mother/son bond.
Elliot is the main attraction, he's big, beautiful and fun to watch soaring through the air, particularly when Pete jumps on his back and the duo dip through the clouds. The CGI on him is amazing as Disney is able to bring this green giant to live. The visual effects team deserve credit, putting care into everything from Elliot’s emerald-green fur (a nice surprise for a species more often thought to be scaly) to the wobbly way he flies, much as an enormous dog strapped to a hang glider might struggle to keep his balance aloft. ​
But the real heart of the movie is the relationships — the friendship between the boy and the dragon, the love Grace has for her dad, her step-daughter and then Pete — and the reminder that magic is all around us, if we remember to look for it. “Pete’s Dragon” will truly become another Disney classic, much like the original is.