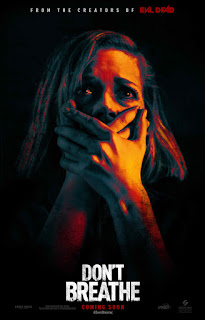 Not every horror film that is set in a house needs a ghost to be scary which director Fede Alvarez proves very well with “Don’t Breathe,” now playing in theaters.

Rocky (Jane Levy), Alex and Money are three Detroit thieves who get their kicks by breaking into the houses of wealthy people. Money gets word about a blind veteran who won a major cash settlement following the death of his only child. Figuring he's an easy target, the trio invades the man's secluded home in an abandoned neighborhood. Finding themselves trapped inside, the young intruders must fight for their lives after making a shocking discovery about their supposedly helpless victim.

Jane Levy is absolutely amazing in her role, proving once again that she not just that funny girl from the short lived show “Suburgatory.” Levy looks so believably terrified as she is running throughout the house and, especially, when the bind mind turns off the light and she has to find her way through in the dark. Dylan Minnette is great in his role and proves that he is a true hero by the way his character comes back to help his friends after hearing gun shots even though most would run away to save their own skin.

Daniel Zovatto, even though he doesn’t last long in the film, is great in his role by the way he is able to play completely calm and confident one minute and then absolutely terrified the next. Now, Stephen Land is the true standout of this film and is truly terrifying in his role, playing a blind guy and proves that you should never assume a bind man is defenseless and for a very short part of the film makes you feel bad for him as he is being robbed by a group of kids. But, his big twist towards the end of the film quickly changes the film and makes it even more dramatic.

For a long time, the shocks of home invasion films were all based on the unluckiness of the people who just so happened to be home when the bad guys come and torture them, but what Alvarez does is that he gives the genre the perfect twist as its now the antagonists who have to fear for their lives.

The way that the house was built for this movie is perfection and definitely gives you that claustrophobic feel with the camerawork and the sound effectively gives the perfect combination of action and horror.

“Don’t Breathe” gives you that edge-of-your-seat thrills that most horror films don’t, and it will take things far darker than any one was expecting.