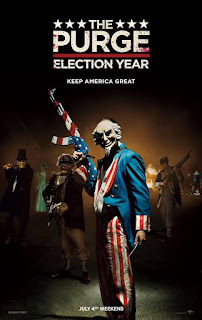 Writer-director James DeMonaco’s third chapter in the thrill-kill vigilante franchise is the best and pulpiest Purge yet with “The Purge: Election Year” now playing in theaters.

In the third installment of this horror series about a night when all crime is legal, a former police sergeant (Frank Grillo) who refused to murder his son's killer must now act as the head of security for a presidential candidate (Elizabeth Mitchell) who wants to end "the Purge." Frank Grillo reprises his role from the previous film and is just fantastic in the role. His character is definitely different than in the last film, with his mind not on getting revenge on the drunk driver who killed his son, but now he is in a much better and clearer head space when we see him in this film. Elizabeth Mitchell is always a joy to watch in anything that she does and is a true talent. The way she plays her character in the film is awe-inspiring and a bit stubborn at times, but is extremely likeable. The rest of the cast was excellent as well. Mykelti Williamson is great in the film and definitely the comic relief of the film with his witty, smart-ass one liners.

The film’s violence (and there’s a ton of it, so consider yourself warned) is stunningly art-directed. In one scene, the steps of D.C.’s Lincoln Memorial are lit up with bonfires and littered with dead bodies, while its white columns are graffiti’s with the word P-U-R-G-E scrawled in blood. In another, a rabid mob of female looters sport cutesy masks and are tatted up in skimpy corsets while wielding bedazzled machine guns. It’s like watching Miley Cyrus skipping through Dante’s Inferno. The only shame is that film’s finale paints itself into a narrative corner that will make it tricky to justify another sequel. Too bad, because three films in, the Purge saga has finally hit its sick, sadistic stride.