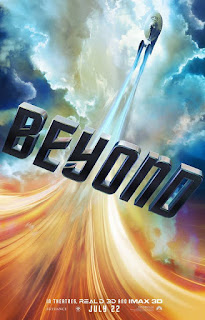 Producer J.J. Abrams and director Justin Lin reunite audiences with the crew of the U.S.S. Enterprise three years into their five-year deep space mission in “Star Trek Beyond” now playing in theaters.

A surprise attack in outer space forces the Enterprise to crash-land on a mysterious world. The assault came from Krall (Idris Elba), a lizard-like dictator who derives his energy by sucking the life out of his victims. Krall needs an ancient and valuable artifact that's aboard the badly damaged starship. Left stranded in a rugged wilderness, Kirk (Chris Pine), Spock (Zachary Quinto) and the rest of the crew must now battle a deadly alien race while trying to find a way off their hostile planet.

Chris Pine is just fantastic as Captain Kirk, paying respect to William Shatner while mixing his own unique style and flare on the beloved character. Zachary Quinto is phenomenal is his role as Spock, truly honoring the legacy that Leonard Nimoy left behind and really captures what it is that Spock represents o so many people. Zoe Saldana is perfect in her role as Lt. Uhura, playing her with such respect and fierceness that proves she belongs in this franchise. The rest of the cast was excellent as well.

Karl Urban is great is his role as Bones, providing the majority of the films comedic relief while also being a total badass. Simon Pegg, while playing the role of Scotty, also is co-writer on this film and proves that he truly knows what makes this franchise so special to many people over the last 50 years. John Cho’s portrayal of Sulu is an interesting one is this film as it reveals that he is a happily married gay man with a child. This is great as it once again pushes the boundaries as the original did before by showing the first interracial relationship. Anton Yelchin will always be remembered as Chekov, making this one of the most emotional films as he tragically passed away before the film was released. He brought so much heart and fun into the film with his role that he will leave a huge whole that cannot be filled or re-casted in future installments.

New to the franchise are Idris Elba as the villainous Krall and Sofia Boutella as the warrior Jaylah are welcome additions. Elba is truly menacing as Krall, and the prosthetics that he has to wear truly make him more believably terrifying. Krall isn’t overused, making him even more effective and where his character is taken throughout the film is fantastic. Boutella is fantastic as Jaylah and is, ultimately, the breakout star of the film and can carry an action scene. Jaylah is not only dependable in a fight, but the connection that her characters has in the film makes her role a more meaningful one. The chemistry she has with everyone, more importantly Scotty, is developed very convincingly.

“Star Trek Beyond” is a truly entertaining ride that brings back what we love about this franchise and gets the audience pumped for the arrival of “Star Trek 4.” There is something for both newcomers and longtime fans to hold on to, as the film pays homage to the Star Trek legacy in touching ways. The 50th anniversary will definitely be an occasion to celebrate, and Star Trek should live long and prosper for years and years to come.