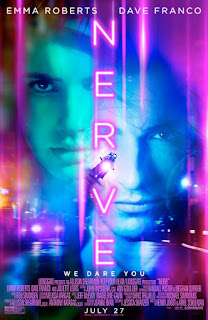 If this movie can’t make teens look up from their devices and explore the world around them nothing will with “Nerve” now playing in theaters.

Industrious high school senior Vee Delmonico (Emma Roberts) is tired of living life on the sidelines. Pressured by her friends, Vee decides to join Nerve, a popular online game that challenges players to accept a series of dares. It's not long before the adrenaline-fueled competition requires her to perform increasingly dangerous stunts. When Nerve begins to take a sinister turn, Vee finds herself in a high-stakes finale that will ultimately determine her entire future.

"Nerve," a thriller set in a world of smartphone-obsessed teens, is clever, exciting, sweet and full of quick twists that never devolve from serving a well-built story. It also is a star-making moment for a budding member of Hollywood royalty who exudes both scene-grabbing confidence and sweet vulnerability. Try to take your eyes off Emma Roberts, who is just as phenomenal in her role as she is at everything else she does, while she is on screen. I dare you. Dave

Franco is just perfect for the role and the chemistry he has with Roberts in truly believable.

But it's also fun to watch, full of camera tricks I haven't seen before and a convincing conclusion I didn't see coming. Sure there are a few movie clichés of the internet age like mentions of "the dark web" and clumsy pixilation effects. Nevertheless, I'd like to think Nerve will usher in a new era of decency. But the final shot lets you know the directors are betting it's a long shot.