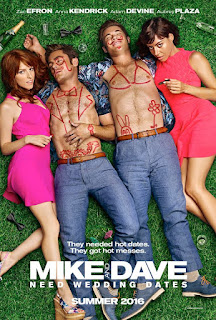 Get ready for fun in a raunchy laugh-a-minute comedy with “Mike and Dave Need Wedding Dates” now playing in theaters.
Mike (Adam Devine) and Dave (Zac Efron) Stangle are young, adventurous, fun-loving brothers who tend to get out of control at family gatherings. When their sister Jeanie reveals her Hawaiian wedding plans, the rest of the clan insists that they both bring respectable dates. After placing an ad on Craigslist, the siblings decide to pick Tatiana (Aubrey Plaza) and Alice (Anna Kendrick), two charming and seemingly normal waitresses. Once they arrive on the island, however, Mike and Dave realize that their companions are ready to get wild and party hard.
Zac Efron was fantastic in the role of Dave Stangle, playing him with perfect comedic timing and is never over the top. The Efron portrays his role just shows how far he has come since his “High School Musical” days. Adam Devine is just hysterical as Mike Stangle, playing him with the right amount of over the top comedic timing and is just fantastic. The chemistry with between Efron and Devine’s’ chemistry is just perfect and they truly capture the bond between brothers and the way they play off each other is hysterical. The rest of the cast was excellent as well.
Aubrey Plaza is just a comedic genius and her character may seem a bit bitchy at certain points, but you can’t help but love her. Anna Kendrick is just phenomenal in her role, playing her character, very convincingly, like a ditz and acts like she on something all the time by the way she speaks and moves about the screen. The chemistry between Plaza and Kendrick is perfect and they really play well together and are a hilarious duo. This film is hilarious and fun and will having leaving the theater is tears of laughter.