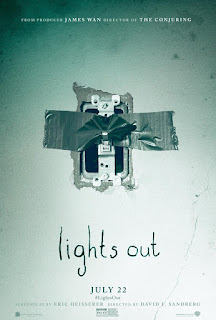 Those who are scared of the dark won't find much in the way of easy comfort watching “Lights Out” now playing in theaters.

When Rebecca (Teresa Palmer) left home, she thought that her childhood fears were behind her. As a young girl growing up, she was never really sure of what was real when the lights went out at night. Now, her little brother Martin (Gabriel Bateman) is experiencing the same unexplained and terrifying events that jeopardized her safety and sanity. Holding a mysterious attachment to their mother (Maria Bello), a supernatural entity has returned with a vengeance to torment the entire family. Directed by David Sandberg from an idea introduced in a previous short film of his and produced by James Wan (“The Conjuring,” “Insidious”), the horror movie takes a common fear and fleshes out a simple idea for full-blown scares.

Teresa Palmer is fantastic as Rebecca, playing her as someone who is just having fun as she has left home at a young age and is now drawn back to that time in her life. She is really plays scared well as she looks truly terrified as she deals with this menacing apparition. The way that Palmer acts towards her brother shows that she cares deeply about him and will protect him at any cost. Gabriel Bateman is truly phenomenal in his role of Martin and proves that he is the heart of the movie. At such a young age, Bateman is able to separate what is real and what is just movie magic to bring his character’s fears to life and does it very convincingly.

The rest of the cast was excellent as well. Maria Bello is always fun to watch, especially in this film. Bello plays crazy very well as she is the source that connects this apparition to our world and just doesn’t quite understand how dangerous it is. Alexander DiPerisa is great in is role, as he is just an innocent bystander in all of the craziness, but does everything he can to keep everyone safe. While the central visual of the figure in the dark goes a long way to provide the essential scares, the success of the film is just as much about what the filmmakers do to develop the characters that the audience cares about. This is especially true of Rebecca and her boyfriend Bret (Alexander DiPerisa), who have a fun, playful relationship that helps lighten the otherwise dark mood.

Sandberg is a fresh new voice in the horror genre, able to bring his unique sensibilities to make something bigger out of an idea that might feel gimmicky in the wrong hands. “Lights Out” is certainly unsettling enough to make you think twice about what might be in the room with you when the lights go out. “Lights out” is fresh, original, and a great addition to the horror genre.