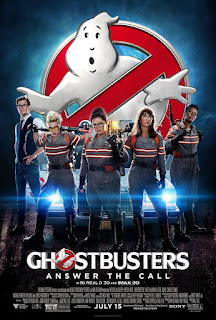 The Ghostbusters are back and funnier than ever as they make their big return to big screen with “Ghostbusters” now playing in theaters.

A pair of authors (Kristen Wiig and Melissa McCarthy) who focus on the paranormal join forces with nuclear engineer (Kate McKinnon) and a subway attendant (Leslie Jones) to fight off a slew of ghosts who have invaded New York City, coming face-to-face with an evil entity who can control humans. Paul Feig (Bridesmaids) directed this reboot of the 1980's franchise, which is co-produced by the director of the original film, Ivan Reitman.

Melissa McCarthy is fantastic in role of Abby Yates, paying homage to Dan Aykroyd’s character in the original just by the way she expresses her excitement when she encounters a real ghost and gives her own unique style to the role. McCarthy was an excellent choice to for this film. Kristin Wiig is perfect in her role of Erin Gilbert, playing her character with great comedic timing, fun loving energy, and at time with a little bit of skepticism. The rest of the cast was excellent as well.

Kate McKinnon is excellent in her role as engineer Jillian Holtzmann, playing her character with perfect comedic timing, a dash of craziness, and at times a bit scary but will make you laugh and love her character. Leslie Jones is just perfectly hysterical in her role as Patty Tolan, giving a perfect amount of comedic timing and is just really fun to watch her run on screen as a crazy person at certain parts. Chis Hemsworth is a perfect in his role as Kevin, playing with the perfect amount of dorkiness and is just hysterical to watch as he messes stuff up and doesn’t really know what the heck he is doing. Plus, he gets his turn at playing the villain as he gets possessed by bad guy, Rowan North. Neil Casey takes on the role of Rowan North and is just creepy and insane in his portal of his character.

The chemistry between the new Ghostbusters is perfect as they are able to play off of each other’s comedic style. Director Paul Feig one again proves that he knows how to make a great and fun comedy and assemble an amazing cast and is able to pay homage to the original film by throwing in certain quirks that fans will be able to see. Some of the cast of the original film make small cameos in this film and it pays tribute to Harold Ramis, whole played Dr. Egon Spengler in the original film, as he sadly passed away two years ago.


So, who you gonna call? Call a friend and go see the new “Ghostbusters” kick some ghost butt.