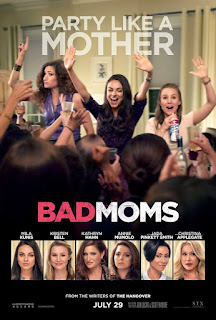 The latest big-screen evidence that women are hot (kind of), and not simply in a frat-boy way, is “Bad Moms,” now playing in theaters.

Young Amy (Mila Kunis) has a great husband, overachieving children, beautiful home and successful career. Unfortunately, she's also overworked, exhausted and ready to snap. Fed up, she joins forces with two other stressed-out mothers (Kristen Bell, Kathryn Hahn) to get away from daily life and conventional responsibilities. As the gals go wild with their newfound freedom, they set themselves up for the ultimate showdown with queen bee Gwendolyn and her clique of seemingly perfect moms.

Mila Kunis is great in the role of Amy, playing her like a frantic mom who tries to do everything to be the perfect mom. This is the first time I have seen Mila playing a mom on screen and she just nails it in and is hysterical in the process. Kristen Bell is hysterical in her role as Kiki, and playing her as an overachieving mom who gets no help from her husband and runs around like a crazy person with no life. Now, Kathryn Hahn is phenomenal as Carla, playing her kind of sluty but is hysterical especially with her one liners. The chemistry between these three women is perfect and they play off of each other believably.

The rest of the cast was excellent as well. Christina Applegate is just perfect in role as Gwendolyn, playing her with the perfect blend of bitchiness just by the way she acts like she runs everything and everyone. Jada Pickett Smith and Annie Mumolo are great in their roles, playing Applegate’s sidekicks. Even though the kids don’t get much screen time, Emjay Anthony and Oona Laurence are perfect playing Mila Kunis’ children.

If I could write sonnets, I would write one about Ms. Hahn, whose timing — she finds depths in that little pause before a joke crests — can turn laughs into howls. What makes “Bad Moms” funny (aside from its lineup of gifted performers) isn’t that Amy and her friends go wild; they don’t, not even close. It’s the women’s shared, near-orgiastic pleasure in their freedom and friendship. In the most comically honed and sustained scene, Amy, Kiki and Carla run mild and a bit loony — and in slow motion — through a supermarket, where they rip open boxes, chug booze and (absurdly) terrorize a guard, their every offense turned into an epic of blissed-out destruction by the decelerated visuals. There’s nothing genuinely transgressive about their behavior; they’re just drunk, happy and together.