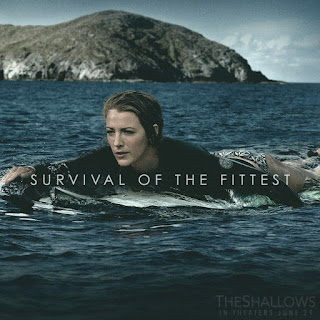 This is not just another day at the beach and you should fear “The Shallows” now playing in theaters.


Young surfer Nancy (Blake Lively) travels to a secluded beach in search of a secret spot that her mother had discovered years earlier. While paddling out into the waves, she is hunted by a great white shark and stranded on an embankment away from the shoreline. Alone and wounded, she attempts to survive the attack and get ashore in this thriller directed by Jaume Collet-Serra.


Blake Lively shines in her role as Nancy, a surfer who is unfortunate enough to come face to face with a shark. Lively’s performance will leave you breathless and terrified and you probably won’t want to go the beach after watching this film. She brings all the fun, fear, and heart-pounding intensity that goes into making a thriller shark movie. This film is by far the best shark thriller since “Jaws”. The effects that went into creating each shark attack and her little island in the middle of the ocean that she gets stranded on is pure genius. And this film proves that you don’t need music to pump up the audience before the shark attacks.