Teenage Mutant Ninja Turtle: Out of The Shadows Review 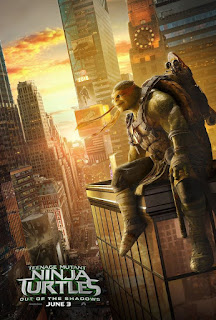 The turtle brothers are back and funnier than ever with “Teenage Mutant Ninja Turtles: Out of The Shadows” in theaters now.
When the evil Shredder develops his own mutants, Bebop and Rocksteady, the Turtles must team up with April (Megan Fox), news reporter Vern Fenwick (Will Arnett), and their new vigilante friend Casey Jones (Stephen Amell) to defend New York City from destruction. Leonardo, Raphael, Michelangelo and Donatello also face an impending invasion from the deranged extraterrestrial Krang in this sequel to 2014's Teenage Mutant Ninja Turtles. Dave Green directs this action comedy, with Michael Bay serves as a producer.
Megan Fox is just amazing as she returns as news reporter April O’Neil, playing her as the not so damsel in destresses and proves that she can definitely handle herself in a fight, although she doesn’t mind having a little help. Fox just brings an amazing performance to the role and is just a complete badass and incredibly. Will Arnett return as cameraman to city hero Vern Fenwick and is just hysterical in the role. Arnett is definitely one of the comedic reliefs in the film and proves that he can also be a badass.
The rest of the cast was excellent as well.
Noel Fisher, Alan Ritchson, Jeremy Howard, and Pete Ploszek bring back the amazing of performances of the turtles, Michelangelo, Raphael, Donatello, and Leonardo. The chemistry between these guys truly emphasizes the term brothers and what it means to work together and be a team. Noel Fisher is just hysterical and will instantly become your favorite. Joining the cast is Stephen Amell (CW’s Arrow), taking on the role of Casey Jones and playing him just perfectly. A total departure from his character on “Arrow”, Amell brings the fun, and proves once again that he is a total badass and his comedic timing is just perfect.


The special effects were spectacular and the IMAX 3D Experience really brings them to life and Michael Bay definitely makes one hell of a great movie. So, go take a friend or sibling and go see the turtles in action. Catch Stephen Amell as Oliver McQueen on “Arrow”, Wednesdays on the CW.