Me Before You Review 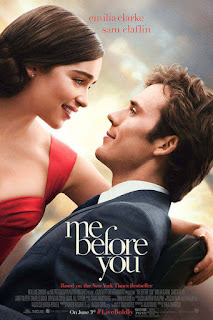 Another great book comes to life on the big screen with the latest adaption “Me Before You” in theaters now.
After losing her job as a waitress, a young woman named Lou (Emilia Clarke) is hired to act as a caregiver for Will (Sam Claflin), a banker who was paralyzed in an accident. Although Will has grown despondent since his injury, Lou's no-nonsense ways force him to reconnect with life, and the pair eventually develop feelings for each other. Theater director Thea Sharrock makes her feature directorial debut with this romantic drama, which was adapted from the best-selling novel by Jojo Moyes.


Emilia Clarke (Game of Thornes) takes on the role Lou, playing her so perfectly. Clarke proves that she is just a badass, but that she is hilarious. She just brings her characters’ bubbly and loveable personality to life. Sam Claflin (The Hunger Games) brings the character of Will to life by bring all of the emotion that his character is feeling while being paralyzed and unable to move his body. The chemistry between Clarke and Claflin is perfection and will instantly touch your heart. Take a love one and go see for yourself. Be sure to catch Emilia Clarke on “Game of Thrones” Sundays on HBO.