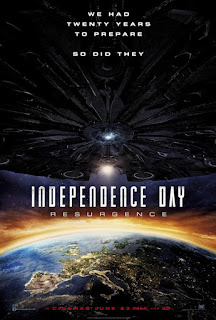 When you thought the war with aliens was over, you were wrong. The world had prepared for 20 years and now the wait is over with “Independence Day: Resurgence” now playing in theaters.
Roland Emmerich returns to the helm for this long-awaited sequel to the 1996 blockbuster Independence Day. Fearful of another attack, the nations of Earth have teamed up against their common enemy -- the extraterrestrials who brought humanity to the brink of extinction. Using recovered alien technology to bolster their defenses, the alliance braces itself for another invasion. Jeff Goldblum and Bill Pullman reprise their roles from the original film, while Liam Hemsworth, Jessie Usher, and Maika Monroe are among the new additions to the cast.
Jeff Goldblum is great as he returns as David Levinson, playing him pretty much the same, but with a lot more knowledge about what is going on than the first film. Bill Pullman is also back as President Whitmore, now former President. Pullman’s character is very different from the first film, now acting like a crazy old man haunted by dreams of the aliens and is just as fantastic with his performance. The chemistry between Goldblum and Pullman is great, even though they don’t interact much and the tension that was there in the first film is not water under the bridge. The rest of the cast was excellent as well.
Liam Hemsworth joins the cast and is just fantastic as a smart ass who you just can’t help but like. Jessie Usher takes on the role of Will Smith’s son Dylan and is great, playing him with heart and emotion as he takes on alien invaders. The chemistry between Hemsworth and Usher is very intense throughout the film, but is a perfect match as they play off of each other. Maika Monroe takes on the role of Patricia Whitmore and just plays the role so beautifully and her chemistry with Bill Pullman is undeniable perfect. Other standouts are Joey King and Zeb Sanders as they play kids who get caught in the middle of this insane invasion.


Will Smith’s absence in this film is undoubtedly felt and if he had been a part of the sequel then this film would have turned out completely differently. The effects in this movie are truly spectacular as they were able to do more with them then back in 1996. Overall, this movie is full of action, adventure, witty banter, and is a great addition to the Sci-Fi genre. And let’s not forget: They messed with the wrong planet!