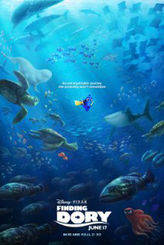 Dory, Nemo, and the gang are back with new friends and a brand new adventure in the highly anticipated sequel, “Finding Dory”, in theaters now.

Ellen DeGeneres is fantastic as the loveable Dory, playing her with the same passion, commitment, and love of the character as the previous film making you fall in love with Dory all over again as she takes center stage in this new film. Albert Brooks returns as Marlin and is just as lovable and overprotective as ever as in the first film, but mean well and that is what makes him so relatable. The chemistry Dory and Marlin is pure magic as they continually show how much they care about each other. Hayden Rolence takes over for Alexander Gould as the voice of Nemo, and brings the same innocence and lovability as Gould did in the first film. The rest of the cast was excellent as well.

Ed O’Neil brings the voice of Hank, the octopus, to life and plays him with a cranky personality, but you just can’t help but love the character. Diane Keaton and Eugene Levy portray Dory’s parents, and their chemistry with DeGeneres with have you in tears of joy and sadness. Ty Burrell plays Bailey and is great in the role and even Sigourney Weaver has a cameo in the film as the voice of the Monterey Marine Life Institute announcer.

The pacing of Finding Dory is just as smooth as the first film. The film uses a mix of present tense action that triggers moments of clarity in Dory's jumbled memories. The time-hopping narrative structure makes the movie more entertaining and sets the stage for an even bigger emotional punch, much like its predecessor. Stanton spends a good amount of time establishing Dory's quirky personality with direct correlation to interactions and experiences from her past - which fleshes out the character and doesn't steal away the many things that made Dory so refreshing in Finding Nemo. Finding Dory brings the same fun, hilarity, and joy as the first film, so take you someone you love and go see this movie.