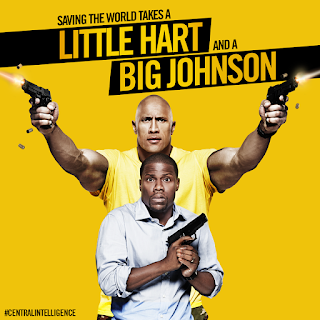 Dwayne Johnson and Kevin Hart bring all the action, hilarity, and fun in their new film “Central Intelligence” in theaters now.
Mild-mannered accountant Calvin (Kevin Hart) is stunned when he runs into an old high-school classmate named Bob (Dwayne Johnson) -- once an overweight and frequently bullied teen, Bob is now a CIA agent who's in perfect shape. However, their reignited friendship turns dangerous when Bob asks for Calvin's help with a crucial mission involving the hacking of U.S. spy satellites. Directed by Rawson Marshall Thurber (We're the Millers).
Dwayne Johnson is great in the role of Bob Stone, playing him like a crazy stalker, but with a heart of gold. He clearly was having fun with his character by the way that he would just appear and disappear on screen and completely ignore Kevin Hart whenever he said no. Kevin Hart is fantastic in his role, playing his character with perfect comedic timing by the way he would just go on a hysterical tangent. The chemistry between Hart and Johnson is excellent and you can clearly see how much fun they had together making this film by the bloopers during the end credits. Johnson and hart are the perfect comedic team and I can’t wait to see them do another film together.


The rest of the cast was excellent as well. It was a very nice surprise to see Jason Bateman and Melissa McCarthy make cameos in this film, adding to its already fantastic cast. Go grab your best friend and see the funniest movie of the year that will make you laugh your ass off.