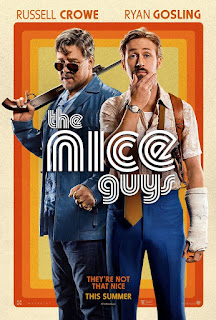 Hilarity and a hilarious buddy romance graces are theater screens with “The Nice Guys” now playing in theaters.
In 1970s Los Angeles, bumbling private eye Holland March (Ryan Gosling) and muscle-for-hire Jackson Healy (Russell Crowe) become unlikely partners when they find themselves both looking for a missing woman named Amelia (Margaret Qualley) following the death of a high-profile porn star. Amelia's ties to the deceased actress are unclear, but as other members of the porn industry turn up dead, March and Healy's investigation reveals a much bigger conspiracy than the duo could have ever anticipated. With the help of March's teenage daughter Holly (Angourie Rice), their sleuthing eventually unearths corruption within the federal government. Shane Black (Iron Man 3) directed and co-wrote this action buddy comedy, which co-stars Kim Basinger and Matt Bomer.
Ryan Gosling was fantastic in his role of private eye March, playing him with such likeability that you can’t help but like him even though he is drunk throughout the entire film. He is hilarious in every scene and plays his role very convincingly. Russell Crowe takes on the role of badass Healy and great in the role, playing him as someone that would hire in real life to take care of a problem. The chemistry between Gosling and Crowe is perfect and the way that they play off of each other’s comedy styles is just pure genius and really brings the movie to life. The rest of the cast was excellent as well.
The set and costume designers really brought 1970s Los Angles to life. Special shout out to the amazing Ty Simpkins who opened the film in an interesting and hilarious way. “The Nice Guys” is a fun, hilarious, and entertaining film that will have you laughing from beginning to end. Go take you best bud and see it for yourself.